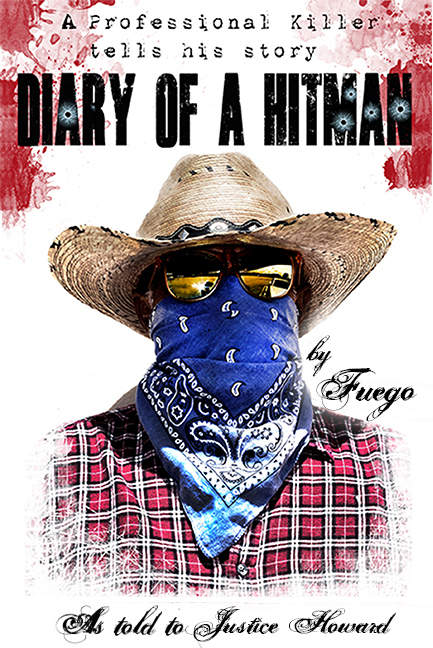 DIARY OF A HITMAN

“The Devil asked me how I knew my way around the halls of hell.

I told him I did not need a map for the darkness that I know so well.”

This is one man’s unflinching journey through the wreckage of trauma, abuse and childhood horror with the torturous Father he called MONSTRO and his revelatory battle with the devils and angels on his back. The first chapter “M IS FOR MONSTER” deals with his unbelievable tribulations as a child at the hands of his father who relentlessly and horrendously tortured him during his entire childhood. Our story then rolls on to his first kill at 14 years of age in retribution for his 84-year old grandmother’s rape and sodomy murder. At 14 he turned ‘independent contractor’ and went on to annihilate over 300 men for the people who hired him to do what he calls “pest control.”  The second chapter “E IS FOR ESCOBAR” is an account of what it was like to hang and work for Pablo Escobar. Yah, we have all seen NARCOS so we all know that Drug Lord stuff, but this is private information from a family member who knew him well. You’ll hear what it was like to hang with and work for Pablo Escobar, El Chapo and the Mafia and secret info from a one-man annihilation crew. Fuego in Spanish means ‘fire’. Our hero got that nickname from lighting people on fire during his job in what he calls “pest control”. This is Fuego’s own story as he comes forth trying to wipe his bloody slate clean and find some redemption during a time in his life when kindness is his propeller and Jesus is at the helm.

A fast-paced, clean, no-frills read that will change the way you think about just about everything.

Most books of this nature are fiction

It’s going to be a dark journey

Strap in and get ready to roll

“This is a BEAST of a book about violence and redemption.”
……Rocco Morelli / former Cosa Nostra

“Warning, read it, but do so at a time when you  are of strong mind. This book is unembellished and tells a story of a life filled with violence and remorse.”
…..Adam Rifkin / Hollywood Producer

“In the profession of professional killers Fuego is considered a leyenda (legend) as well as peligroso extreme.” (extremely dangerous)